We are having blustery March weather which has yet to exhibit any lamb-like tendencies. And it has been reliably wet, which is a good thing this time of year. The croci and daffs are blooming their hearts out while the grass is turning a nice lush green color.

I have found the little doodad for making seed starting pots from newspaper; the seed starting heating mat is still missing, as is my horticultural knife. The knife has been replaced with a brand new one. It is really hefty, should last a lifetime... as long as it doesn't disappear.

I also ordered a mini LED grow light garden from Gardeners Supply, but it is backordered. In years past, I dragged some wire shelving in from the garage, mounted shop lights, and started seeds in the den. This year, given the reduced garden size, I decided to put the seedling pots on the kitchen counter, under some under-cabinet LED lights. (Photos refused to turn out.) Given the limited amount of counter space in my kitchen, this is not the best solution. However, the zinnias and hollyhocks are up, as are most the herbs. Maybe this time I will have more success keeping the seedlings alive than I did earlier this year.

Still not a lot of birds at the feeders, although I did see a red wing blackbird the other day. I've determined (in a completely unscientific way) that the difference between winter robins and spring robins is the former feed in the trees while the latter are on the ground listening for worms.

There is a web site I have just discovered that forecasts bird migrations (among other things). It's called BirdCast and may be found here. I'd like to know specifically when orioles arrive here so that I can put out my oriole feeder.
Posted by bittenbyknittin at 12:05 PM No comments:

I decided to transplant the Dracena marginata I lopped off a while back as there were a few roots poking out of the bottom of the pot. (Photo did not turn out.) There were fewer roots than I expected, so the poor thing feels unstable. Also, Beau the Feline Destroyer of All Things Nice kept trying to nibble on the leaves while I worked. The repotted plant is back in my bedroom (where the cats are forbidden - one too many episodes of puke on the bedding). It seems to be doing okay on the dresser despite the lack of direct sunlight.

Besides not being able to find the heating mat for seed starting, I also cannot find the doodad I have for making little pots from newspaper. The New York Times came to my rescue with instructions for making these pots which use a tomato paste can for the form. I went to town. 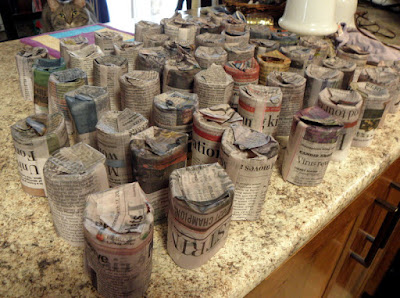 I think there are about 44 pots here, all filled with potting soil. The seeds are out of the refrigerator. I just need to decide what and how much to plant. There will be herbs, hollyhocks, and zinnias for sure. 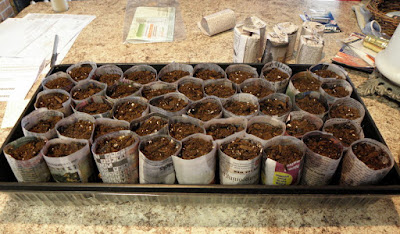 I subscribe to the digital edition of the New York Times, but receive a hardcopy of the local paper. I've contemplated going paperless with the latter as well, but I use a lot of the newspaper in the garden and for various and sundry things. I guess I'll keep getting it for now.

I worked on cutting down the big bluestem this past week and came to the conclusion that there are THREE plants, not four. Three of them flop and do not form a clump; what I thought was a fourth plant is a clump of something else, silvergrass, I presume. For a while, I was mistakenly identifying some silvergrass as big bluestem; I must have moved it, thinking it was joining its cousins.

The lawn service came and applied fertilizer and a pre-emergent to the front lawn. They leave a little sign in the yard as advertisement, but given the state of my lawn, they might not want to do that yet. I don't expect any miracles there.

Per usual, I like to sit on the deck in favorable weather and plot changes to the yard. Last summer, I moved a lot of plants around. I was contemplating something similar for this summer or next, but the thought struck me that I don't particularly like everything in my yard. My habit has been, You plant it, you keep it. But some shrubs are too big, others too small, some uninspiring, many perennials that I love are missing, etc. My eye has become much more critical now that there is less room for stuff. It's time to take inventory and decide if I want to keep, replace, or just plain remove some things.
Posted by bittenbyknittin at 10:19 AM 1 comment:

A fence in time

One sign of spring is the premature visits to any business that has a gardening department. My SO and I needed more mulch for under the gold mop, so we stopped at Home Depot where I also picked up a few more sections of the fencing I like. 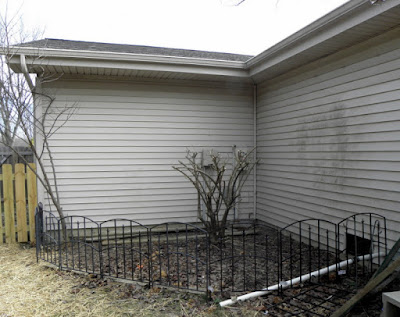 I invited the hardscape guy who did my driveway to give me an opinion about trying to remove some of the water from my backyard. The heavy clay holds a lot of moisture, and I have four downspouts and a sump pump all emptying on the north side of the house. Because my yard is so flat, moving water away from it is a big deal that would involve thousands of dollars. So now I know. My SO suggested a rain garden in the problem areas, which I may just follow up on, in the form of pocket gardens.

Yesterday my granddaughter spotted a vacated bagworm casing on the Prairie Fire crabapple. Gah! I thought it was just a dried leaf, which is exactly what the bagworms want you to think. I'll have to keep an eye out for those little buggers.

The birds have all disappeared, or so it seems. I guess with the snow gone and spring on its way, they have other dining options. Soon the migratory birds will arrive. If I pay attention, I may spot something unusual.

Posted by bittenbyknittin at 3:13 PM No comments:

I almost missed spotting these early birds: Crocus tommassinianus 'Roseus', aka Tommies. For one thing, I forget where I have planted them. For another, they are so early, my eyes are not yet trained to spot them amongst the gray and taupe landscape. A welcome sign of spring! 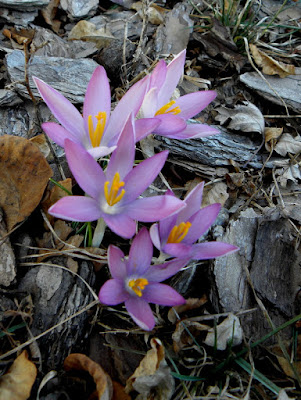 This week I signed up with a lawncare service that follows organic practices, for just the front yard (for now). We'll see how that works out. I've never had the lawn commercially treated, although I used to periodically and sporadically treat it myself. In recent years, that degenerated to spot treating dandelions in the spring. The lawn is a bit of a mess. I will still do the mowing, but this business has a sister business that provides services such as mulching, edging, mowing, etc. If I need help while having my shoulders fixed, I can fall back on them.

My SO came over and helped me mulch under the gold mop; I just can't crawl under there anymore. I've also been cutting back perennials and grasses. The yard isn't quite so ugly anymore, but there is still more to do.