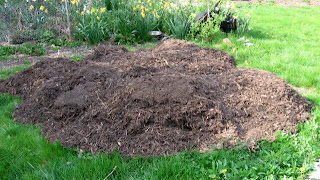 This is one of several mulch piles now decorating my backyard. Instead of getting one load and distributing it, we fetched two loads and piled it for later relocation. One reason for this strategy is so I don't have to keep borrowing my neighbor's pickup truck, but also so I can think about just where I want the mulch to go.

Yesterday, I spent the morning at a rain garden workshop, sponsored by the city. The goal of a rain garden is to reduce storm water runoff into the sewer system. My true reason for wanting a rain garden, though, is to have a city-sanctioned excuse to turn a fair amount of my front lawn into habitat. Rain gardens consist of native plants, which can look a bit wild and weedy, but registering the rain garden with the city keeps Neighborhood Code Enforcement at bay. Heh.

The latest bloomer in my backyard is the serviceberry. 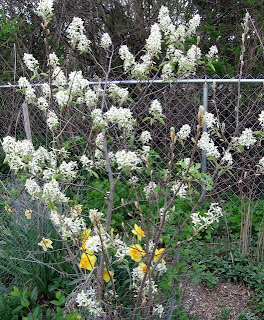 This poor thing has had a rough time. Its first winter I did not protect it from the rabbits. Until last summer, it received too little sunshine. It has also suffered late frosts. But now I think it will finally come into its own.
Posted by bittenbyknittin at 8:28 PM No comments:

In the pink - and green

I love my rhododendrons. 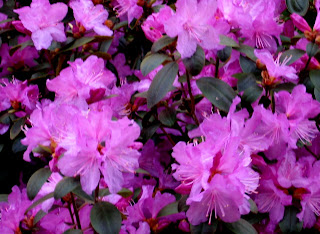 They are beautiful in the spring, and in the winter, I can tell how cold it is by observing the curl of their evergreen leaves outside my bedroom window. 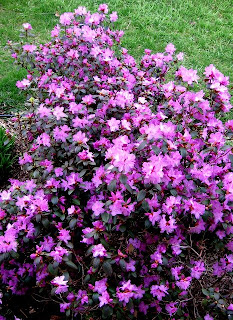 Rhodies like acid soil. Cheap gardener that I am, I side dress my three plants with sphagnum peat moss and coffee grounds. Apparently, that is good enough for them.

And here is a quick video of Hip Hop enjoying one of his favorite snacks.

Mmmm, fresh parsley!
Posted by bittenbyknittin at 8:22 PM No comments:

My eastern neighbor's front door is recessed into the front of his house, so as you stand there knocking, there is a wall on either side of you, each with a high octagonal window. While I was standing on said porch the other day, I noticed a lot of organic detritus under my feet. When he answered the door, I pointed out a huge nest on one of the window ledges.

There's one there, too, he said, pointing to the other window.

What kind of birds?

Just then, something swooped right at my head. I ducked so fast, I nearly fell off the porch.

That kind of bird, he said. Sitting in a nearby tree was a robin, beak full of dried grass and looking put out.

I guess I need to get rid of those nests, he sighed.

Well, I wouldn't, I allowed, but then that's just me.

But people can't come to the door with them protecting their nests.

Sometimes that's a good thing, I pointed out.

Meanwhile, the nest building is progressing in my yard as well. This is a grackle nest in the privat. 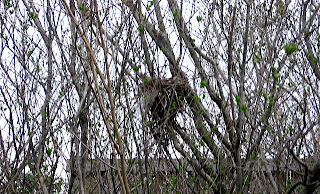 I took down the bluebird house that the sparrows were highly interested in, but to my surprise, they had not yet built a nest in it. I'll put it back up in May.

A year or so ago, when my neighbor to the north of me put up a bird bath and feeder, she commented about not wanting to attract the "wrong kind" of bird. I didn't ask her what she meant, but now I am wondering if she was talking about grackles and starlings. 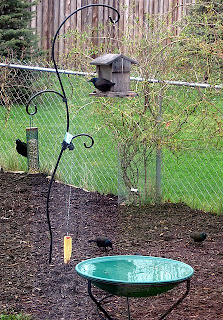 They and the sparrows are my most frequent visitors now. I don't like to feed the birds during the summer - that's why I have a backyard habitat populated with food plants - but I also don't like holding birdseed until fall, so I am letting them finish off the sunflower seeds and peanuts.

Saturday would have been a good day to plant snap peas. I thought I had ordered some online, but apparently not. There was half a bag in the refrigerator, though, left over from two years ago. Wondering whether they were still viable, I soaked ten pea seeds. 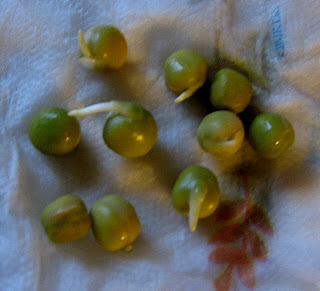 Huh. Still good, mostly. Now if it would stop raining, I could put these in the ground.

P.S. There's a survey on honesty over here on one of my other blogs, in case you are interested.
Posted by bittenbyknittin at 4:00 PM No comments:

Today was one of those perfect spring days - perfect temperature, perfect humidity, sunny, no breeze to speak of, and a Saturday, so one could actually be outside enjoying all that perfection. So enjoy it we did, to the tune of one load of mulch. Since my neighbor threatened me, I had to use his pickup truck to fetch said load of mulch from the biosolids site (mulch is free, but having it loaded cost $5). And my SO, who washed my windows yesterday (I know - best boyfriend ever!), helped with the transfer of said mulch to various and sundry locations around the backyard. We ran out of mulch and energy about the same time. I need more (of both mulch and energy), but the perfect weather is scheduled to end at midnight tonight.

Before I trudge off for a long soak, here are a few pics from around the yard. 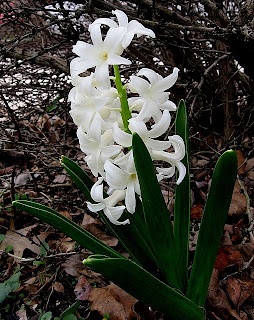 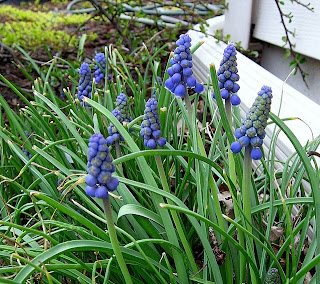 The march of the pink flamingos past the pink hyacinth: 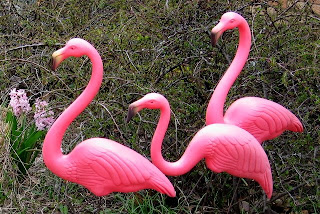 I severely pruned the forsythia last year, and it is still pouting, so no golden arches this spring.
Posted by bittenbyknittin at 5:05 PM No comments:

I finally got him on "film"!

Posted by bittenbyknittin at 11:07 AM No comments:

One of the many garden items I purchased for this year is a "worm composting system" from Gardens Alive. The name is a little misleading, as we are not composting worms here; the worms are doing the composting. All I have to do is keep them watered and fed, and they will give me black gold. 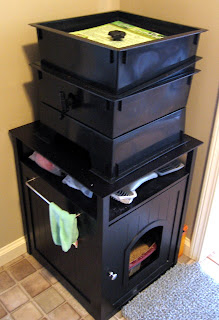 The composter components arrived last week, and I assembled them and waited for the worms, which arrived Wednesday. I wish they had sent me an email, warning me that the worms are coming, the worms are coming, because I was not ready. I would have taken pix of the building of the worm bed, but it was date night (my SO did not blink an eyelash when I greeted him with hands covered in something that looked like shit), and I was in a hurry and not a little flustered. 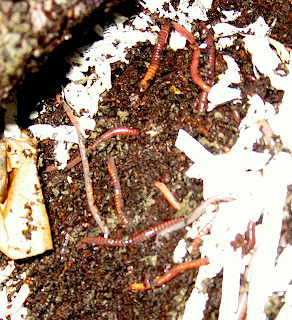 I don't even have many food scraps for them to eat yet, besides coffee grounds. I'll have to work on that because, once they are up to speed, they will eat three times their own weight in garbage each week. I started with 500 worms, but this composter will support 10,000 - 12,000. I may have to start a worm wholesale operation.

Under the subject of spring cleaning, you know how empty your house looks in preparation for carpet cleaning?... 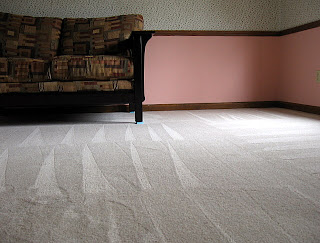 Because everything that is movable has been crammed into the remaining rooms?... 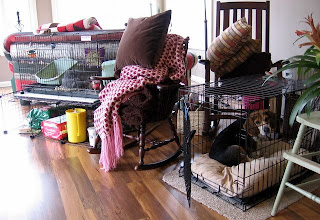 Including the dog?
Posted by bittenbyknittin at 5:38 PM No comments: 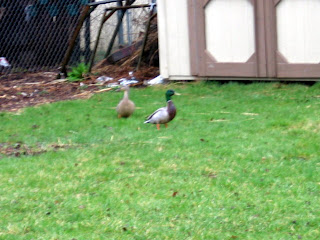 Yesterday my backyard was so soggy I had mallards. Today it looks like Mother Nature scrolled back the calendar. 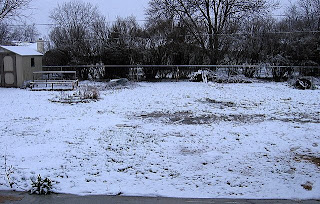 But the daffodils are still standing!
Posted by bittenbyknittin at 8:11 PM No comments: 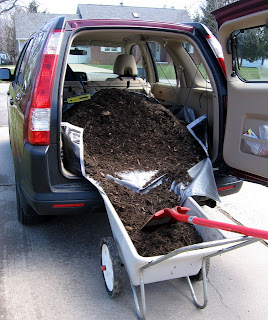 While I was unloading mulch from the back of my CRV, I heard a voice ask, "Are you going to make me yell at you for not using my truck?"

It was my neighbor from across the street. Two years ago, when he owned a beat-up blue Toyota Tacoma, he offered said truck for mulch-hauling. But now he has a nice white Dodge Dakota. I didn't want to mess up his new truck.

"When you get up close, you'll see it's not that new and not that nice."

Okay, then, I will take advantage of him and his generosity.

But if you don't have such friendly, truck-owning neighbors, I can recommend the SUV liner pictured above from Lee Valley. It protects your vehicle when you need to tote something not-so-nice.

The above-pictured mulch (and a load of compost) were free, courtesy of our county biosolids site. Residents can drop off yard waste for a nominal fee, and if they load it themselves, take away compost and mulch for free. (There is another nominal fee if they load it for you.) Since their frontloader would not fit inside my CRV, my SO helped me first with a load of compost, then a load of mulch. The car looked full each time, but what I brought home did not go far. That truck will come in handy.

The compost went into making beds for peas and onions, but the weather is not cooperating. I was tempted to plant this morning, but I see the forecast is for freezing temps this week. Must be patient.

The daffodils are not, though. Last fall I ordered the "Hybridizer’s Pink Daffodil Mixture" from Brecks. Below is a sample. 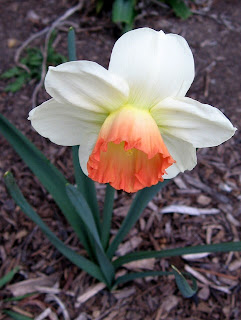 Between ordering them and seeing them in real life, my mind's eye had pictured something different, something pinker. I may replace them next fall... or not. I'm lazy like that.

Posted by bittenbyknittin at 10:30 AM No comments: