The Chicago Botanical Garden was on the way

My SO and I scheduled a road trip to Milwaukee last weekend, and since the Chicago Botanical Garden was on the way, we decided to stop for a visit. Wowsers! We've been to other botanical gardens, but this one is my favorite (so far).

We are at (ahem) a certain age where we forget things. Consequently, even though we arrived too early for the Grand Tram Tour, by the time we made a trip back to the car (what kind of photographer forgets his camera?), ate some lunch (hint - eat before you come unless you don't mind spending a small fortune for a not very exciting meal), made an aborted trip to the gardens proper, returned to the car AGAIN for sweaters, and visited the facilities, it was time for the tour! 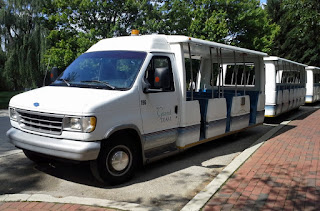 Some might think walking the gardens and touring the grounds is redundant, but I disagree. For one thing, on the tour, you learn all kinds of things you might otherwise not. Also, the Prairie is rather large but somewhat repetitious, at least this time of year (hello golden rod!), so the eyeful we gained from the tram was enough. And the tour was the closest we got to the Japanese Garden, as caterers were setting up for a wedding there.

There are 31 different gardens, and we probably wandered through several of them without knowing which were which. Again, a tour, either the Bright Encounters Tram or one of the walking tours, would have been helpful. We had a map but were too busy looking, looking, looking at everything. I was most interested in the Fruit and Vegetable Garden, and we passed through the Crescent, the Esplanade, and the Native Plant Garden on the way. You know how landscaping books talk about mixing forms and textures, and show you photos as examples? Seeing real life displays of these principles is completely different. 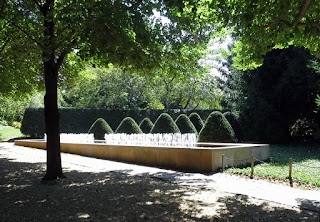 The scale of the gardens is another aspect that cannot be appreciated from looking at books. When you have acres to work with, you can plant acres of landscaping. The trick is to adapt the ideas to the space available in the home gardener's own plot of ground. And add some whimsical art. 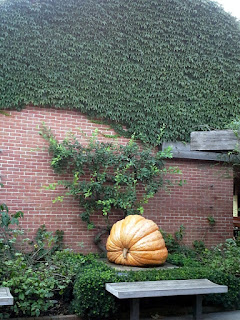 We spent most of our time among the fruits and vegetables. Having planted apple and cherry trees this year in my own yard, and trying to follow explicit directions spelled out in several books on orchards, I was particularly intrigued by the variety of methods used at CBG. (And thanks to the tram tour, I now know how to pronounce "espalier". At least, I assumed the guide was pronouncing it correctly; she was wrong about "artisanal", saying "artesian" instead.)

You can grow fruit trees on a wall. 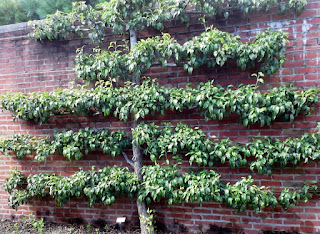 You can grow them in a row. 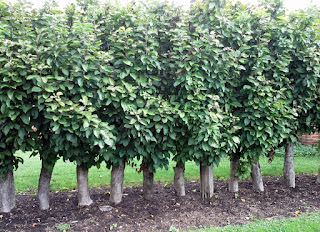 You can grow them on a fence. 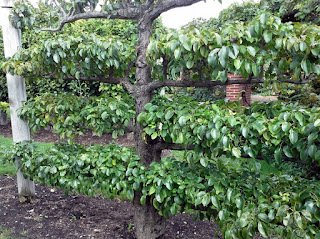 You can grow them on a trellis. The trees on the left side were recently replaced and still rather puny compared to their mature cousins across the archway. 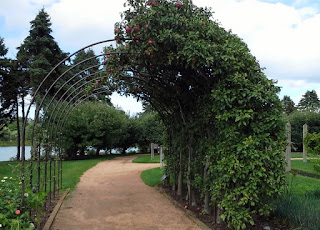 With creative pruning, fruit trees can be shaped and restrained in their growth habit. The only way to tell their true age is by looking at the trunks. 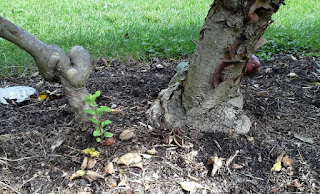 In some ways, the Fruit and Vegetable Garden reflected a vision I entertain of my own yard. This berry cage would not keep out woodchucks, but is very effective at discouraging marauding birds. I don't have trouble with birds in my berries, but the sparrows do like the pea plants, to the point where I have contemplated a cage such as this. An alternative idea is to make use of mylar ribbon, which CBG also uses here and there. 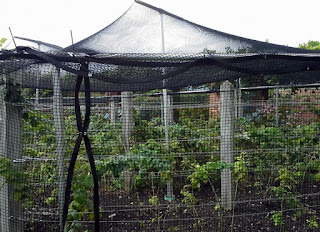 I also hope to have bees some day. 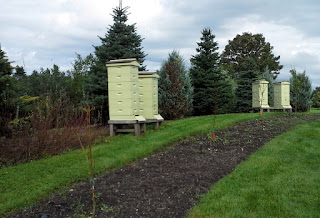 And kiwi! I still have the metal pergola that used to grace the patio, and have contemplated setting it up in the yard as an arbor for hardy kiwi and grapes. CBG did both. 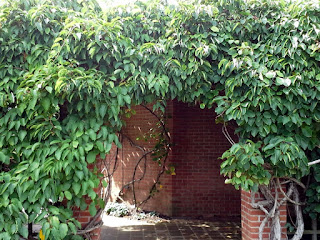 The fruit of the hardy kiwi is smaller than what one finds in the grocery story, but lacks fuzz, so is more palatable for eating without peeling. I'm just not sure what I would do with all that fruit. 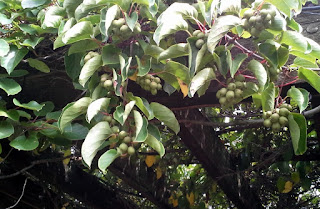 I have never tasted hardy kiwi, but I assume it tastes like store-bought. The fruit at CBG was not yet ripe, plus there were signs posted to not pick the fruit. If everyone said, Just one taste won't hurt, there would be nothing left in no time. 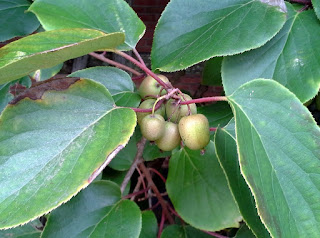 The sparrows that hang around the outside dining area cannot read, though, and tried to get us to ignore the signs that said to not feed the wildlife. On the right side of this picture, there is a plaque on the railing that describes what one sees across the water. CBG is extremely good at labeling plants and trees, which we really appreciated. 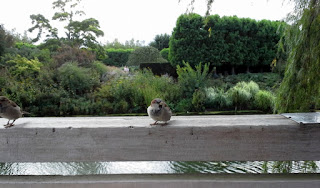 Since the Japanese Garden was off limits, we wandered about the water lilies, which were more varied than I have seen elsewhere. A major water feature is another item on my wish list, but every time I research the idea, I get discouraged by the amount of work they require. 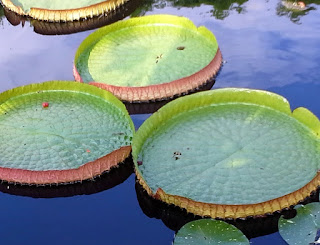 There were very few blossoms this time of year, and I mistook what I now think were seed pods for flowers. 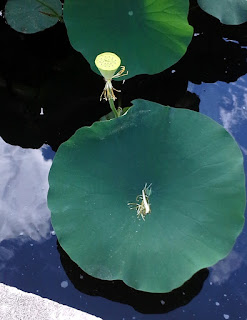 Don't they look other worldly? 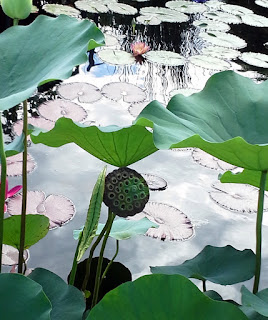 We also visited the Bonsai Garden. This was outside, which could have been problematic for photographing, but CBG erected frosted panels behind each one, which really enhanced the viewing pleasure. 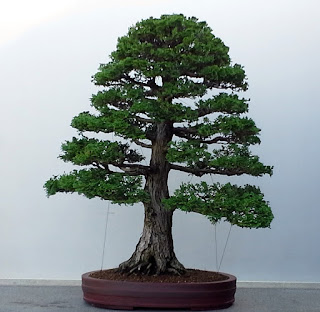 This is one area where more information could have been provided, such as the age of the trees. 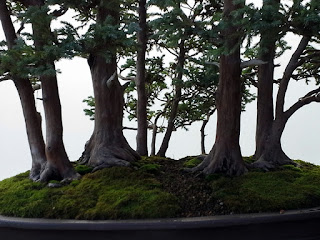 It was time to go, but I kept getting distracted by this, that, and another thing. Even exiting through the visitors center stopped me on the spot, as I had to check out the planters overhead. The pergola on my deck needs something like this, but with vining plants, to provide more shade. 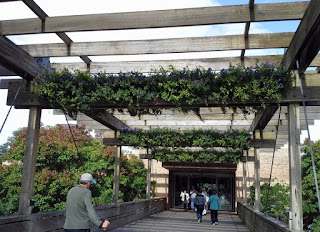 These coir planters were backed by metal sheets, presumably to protect the wood. 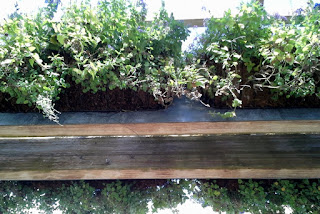 Since my SO now has family in Milwaukee, we anticipate making this trip on a regular basis, and can make the Chicago Botanical Garden a standard stop. We may even join, as membership gains us access to many other botanical gardens around the country, including the one here in Fort Wayne.
Posted by bittenbyknittin at 9:30 AM No comments:

The harvest from the vegetable garden is winding down. It was a good year for potatoes, not so much for onions (my fault, I fear, for mishandling the plants last spring), definitely not for tomatoes. There are always lessons learned: One plant provides plenty of zucchini, sweet corn needs to be harvested in a timely manner unless you like the flavor of starch over sugar, you can never have too much horse manure.


Another lesson: if there is a way, rabbits and woodchucks have the will. Despite the fortification of wood picket, hardware cloth, and poultry netting, there were occasional incursions by critters. Periodic inspections helped, but invariably damage occurred, even late in the season. I learned that woodchucks climb bean poles...


... but no one likes kale enough to justify eight plants.


I tried pointing the finger of blame at rabbits, but they don't care for sweet potatoes, nor will they climb onto the cage supposedly protecting the plants, caving it in and nibbling the protruding leaves.


Fortunately, the enjoyment of late summer flowers balances the frustrations of vegetable gardening. This 'Wild Romance' Aster is a long time survivor. Some years the only thing that saved it was a nearby metal plant marker.


I've become intrigued by a photo of 'Autumn Joy' Sedum grown as a low hedge that I noticed in Tracy DiSabato-Aust's book, The Well-Tended Perennial Garden. My cluster gets a bit leggy from not enough sun, but if I move it and pinch it back, perhaps I too can have a sorta hedge of it along the front of the house.


I mistakenly thought this Catmint was 'Walker's Low' and could not understand why each plant became so HUGE and spread so FAR. While fooling around in that bed, I found the plant tag. Now that I know its true growth habit, I have just the spot for it, around the garden shed.


As usual, there are lots of plans for next year. I'm antsy to try them out, but FIRST. There is work to do, like weeding the area under the Hydrangea so next spring it can be populated with Bishop's Weed, aka Goutweed. Bishop's Weed can be a bit out of control, but this corner is somewhat isolated and I'm counting on Bishop's Weed's shade loving nature to help keep it in check.


I don't quite know what to do about this problem, though. The deck builders did not follow directions to stay within the footprint of the patio slab and extended the deck over the bed with Joe Pye, Cardinal Flower, and Swamp Milkweed. I wrote those plants off, prematurely it seems. It doesn't bother me that they poke up between the boards, so maybe I will just leave them be.


My granddaughter's interest in photography is rather erratic, so I can't count on her providing me with regular pics of the yard, or much of anything else, for that matter. But then, she is not quite five and still exploring all there is to do and see in the world.


Oh, to be young again. (NOT!)
Posted by bittenbyknittin at 1:54 PM No comments: