Today was the first day of real yardening for 2015. I exercise during the winter - walk 10,000+ steps most days, shovel snow, cross country ski, hike, mix in yoga and physical therapy and this and that - but it doesn't seem to matter. None of it prepares me for the bending and stooping, the grasping and pulling, the lifting and lugging that yard work and gardening entail.

Today I focused on the ornamental grasses in the front yard. Usually I saw away at them with one hand tool or another, until my right hand blisters and cramps. This year I decided to take my new hedge trimmer to them.

This is not my first hedge trimmer. Its predecessor met its demise when my SO borrowed it last summer. He kindly replaced it with a better model (this one rotates). But this is the first time it occurred to me to use it for cutting back the grasses. No blisters! No cramps! It's a miracle! Now if it only magically swept up the trimmings and flew them to the compost pile. Bippity boppity boo!
Posted by bittenbyknittin at 5:17 PM 1 comment:

Finally, a very nice day, as evidenced by neighbors walking dogs, pushing strollers, riding motorcycles and bicycles and skateboards. There is still snow on the ground, but it's giving way. Hopefully it will be completely gone before it rains on Friday.

The birds were a bit of a disappointment this winter. Regular visitors included a pair of cardinals, several blue jays, a junco or three, rarely a woodpecker, but otherwise it was sparrows and finches. The squirrels scavenged under the feeders. Since they came in singles, I was not sure if it was the same squirrel or several, but it had to be more than one because one was missing the fur on half its tail. 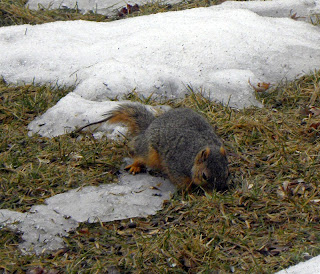 Today I heard a constant (and annoying) chirping, which I assumed was a bird on the roof. Eventually, I realized the noise was coming from my attached garage, and again assuming it was a bird, I opened the garage door so it could fly out. But the noise continued. Using inhuman stealth, I managed to crack the mudroom door open enough to see it was a chipmunk. But why would it not leave? I tried scaring it out, without success. Then I worried it had been hibernating in the garage all winter and was now attempting to attract a mate! Eventually, the chirping stopped, so it either departed or went back to sleep.

I took advantage of DST and spent some time outside this afternoon. Daffodils have broken through on the south side of the house. I dragged the mower through the snow, from the shed to the garage, so I can have it serviced. And a lot of pooper scoopering occurred, another sure sign of spring.
Posted by bittenbyknittin at 6:23 PM 1 comment:

It feels like it has been a long winter, but after perusing March blog entries from previous years, I see that 2015 is no different. Despite my wishing it were otherwise, gardening will just have to wait a few more weeks. 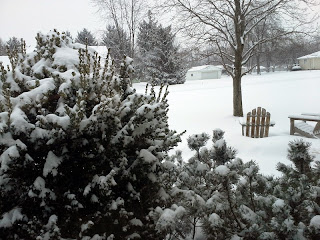 I've been reading up on Stoicism. One of its cornerstones is to differentiate between what you can control and what you can't. The weather definitely falls into the latter category.
Posted by bittenbyknittin at 3:48 PM 1 comment: