A Tale of Two Birdhouses

I read somewhere that if sparrows keep taking over the bluebird house in your yard, locating a second one 5-15 feet away may solve this problem. The sparrows will live in one while the bluebirds take the other. Apparently, they don't mind being cross-species neighbors.


So I did as suggested, but so far, no takers. From my home office, I have watched both male sparrows and male bluebirds lay claim to one or the other house, only to have the house rejected by the females. I'm guessing this happens with human beings as well.

Inside action this week included repotting the rosemary starts. I have had people tell me that rosemary is difficult to grow, but that has not been my experience. Yet.


One group of insiders are now outside, hardening off and soon to be transplanted into the garden. I am not pleased with how spindly these onions are. I don't know what to do to fatten them up, either.


Even though I keep seeing articles about not being fooled by the warmer-than-normal spring temperatures, that doesn't mean one can't start buying plants. Here is one Alberta spruce conica and two juniper chinensis, destined for the west side of the West Wing. These should top out at the right height and reach the right width and provide some protection from the winter winds. Also, drought tolerant.


The mint, catnip, lemon balm, and oregano survived the winter in their above ground container. Not that I was concerned - one look at the garden proper and it is apparent that these plants have many cousins nearby. Mint must be the easiest crop to raise.


The garlic looks great. Every bulb sprouted, although some varieties appear hardier than others. This is year three for growing garlic, and I think the square foot gardening method will be a success with this crop.


I was afraid I would have to start watering the garlic - already! - but fortunately we received a good inch of rain last week. Time for another inch, though. I really hope it is not going to be another dry summer.


I mowed for the first time this year last Sunday. Since I used the mower so little last year, I decided not to have it serviced. Thank goodness it started on the fourth pull. I am still wavering over whether to weed 'n feed this year. There are new ecolawn products out, grasses that grow slowly and require less mowing. But they are incredibly expensive, plus they require sod removal. Ugh. Maybe after I retire.
Posted by bittenbyknittin at 1:20 PM No comments:

I want to dig up the daffodil bulbs this year and divide them, but once the flowers are gone, there is no way to tell one from another. The names of these varieties are a mystery, too, so each clump is getting a tag with a number. So far, four varieties are blooming, although one - the solid yellow - may actually be two varieties, one large and one small. It is difficult to determine whether blossoms are naturally small or just stunted. 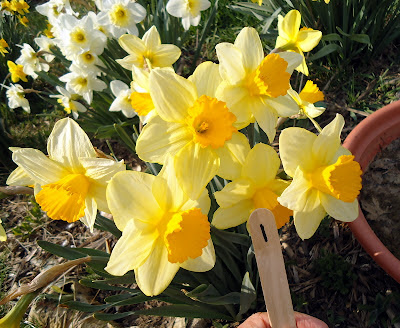 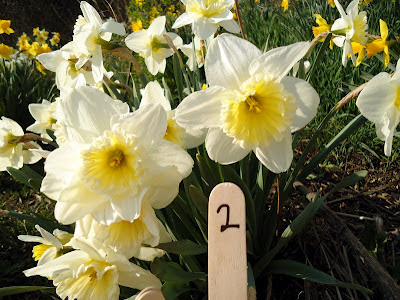 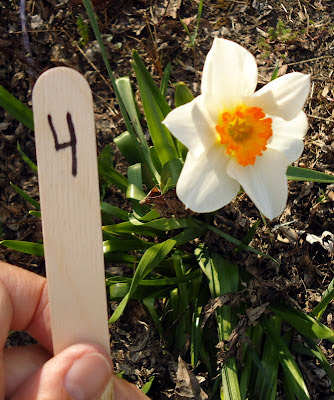 Last year I planted three redbuds which look slightly better than sticks. Even so, one coughed up a few blossoms this spring. 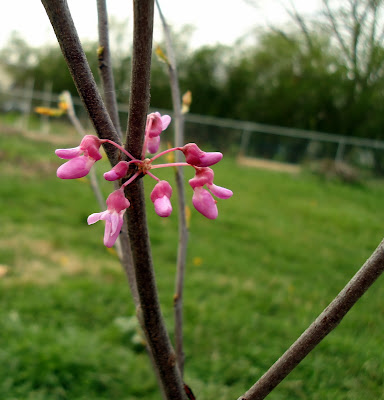 The service berry is in bloom, while many of the early shows are starting to fade already. One concern I have with all this earliness is, there are no bees out and about yet. Are they going to be screwed up from missing this action?
Posted by bittenbyknittin at 6:27 PM No comments:

Besides the daffodils and forsythia, the rhododendron, hyacinth, grape hyacinth, the neighbor's pear tree, etc. are bursting with color. No dandelions yet. (Knock on wood!)
Posted by bittenbyknittin at 1:10 PM No comments:

Yesterday the time was right for planting peas. I calculated how many pea seeds I would need and counted out how many I had. First glitch: The number of pea seeds for the snow peas was not enough for the four squares I had planned. No problem, though - peas are peas (for planting purposes, at least). So I changed plans and decided on two squares of snow peas, four squares of English peas, and six squares of snap peas. I would use the same number of squares I originally planned for peas, but in slightly different amounts of each type.

Peas are not peas for growing purposes, though. The variety of English peas I chose will grow only two feet tall and should not need staking. The snow peas, however, will grow five feet tall and the snap peas four feet tall. So the squares for snow peas and snap peas should abut each other to make the most efficient use of the supports.

Finally, planning revised, I approached the first bed and brushed away the leaves and measured out the four squares for the English peas. I carefully poked holes every two inches, in rows two inches apart. 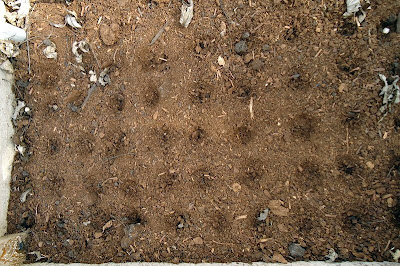 I dropped the seeds into the holes and poked them to a depth of one inch. 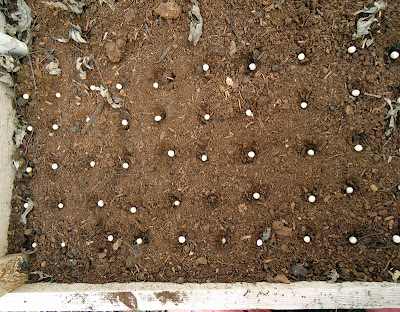 I covered the squares with homemade compost. 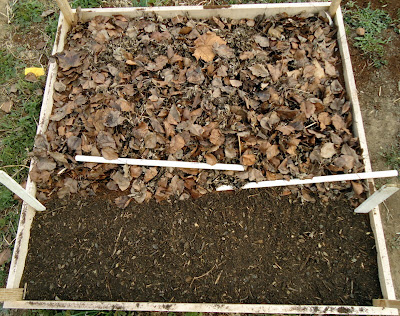 And then, just as I was tamping down the soil with my hands, I realized I had planted the wrong bed.

Because of the shed, of the beds we had built and filled, I had reserved the one that would get the most sun for tomatoes. And that was the bed I had just planted the English peas in. Well, too bad. I mentally shifted the beds, keeping the ones for peas next to each other and the tomato bed at the other end of the row. In spite of all my planning, I can be flexible. 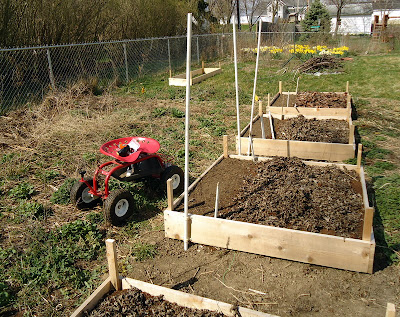 The supports will be from previously utilized PVC pipe and either chicken wire or plastic coated hardware cloth, both of which are in plentiful supply in the shed. Now if it would only rain.

Meanwhile, the daffodils and the forsythia have popped.

All the daffodils decided to bloom at one time instead of their usual staggered sequence. Ditto the forsythia - my bushes usually bloom later than the neighbor's, but not this year. 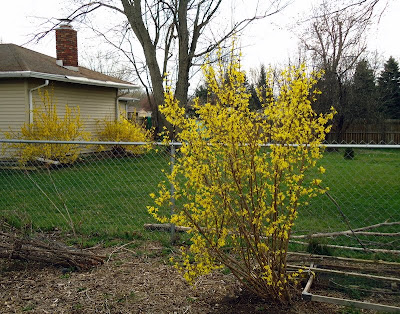 Weird, weird weather.
Posted by bittenbyknittin at 5:46 PM No comments:

Not only is it in the 70s today, the nights are above 50 degrees, my trigger point for transplanting tomatoes. Of course, I don't expect it to stay this way. Also, I have not even *started* my tomato plants yet.

A few flowers are responding to the sunshine and warm temps.


The first of the daffodils are growing where I plan to locate a cold frame - and now you know why.


My SO helped me start filling the raised beds, where square foot gardening meets lasagna gardening. Sometimes I am a stickler for rules, but not in the garden. So instead of mixing together 1/3 peat, 1/3 of 5 different types of compost, and 1/3 vermiculite, we just layered the materials into the beds. For one thing, using that much vermiculite was going to be prohibitively expensive. For another, I think vegetables should be grown in the ground, even if that ground is raised, so I am including some garden soil - the clay will help retain moisture. Also, Home Depot had only two kinds of compost and I did not feel like driving around looking for more.


So far, the layers are: homemade compost, wood ashes, leaves, newspaper, peat, mushroom compost, peat, composted manure, peat. Then I added more leaves yesterday, to keep the peat from blowing away. The beds seem "peat heavy" right now, because 3 cu. ft. of baled peat fluffs quite a bit when released from its packaging. But I anticipate adding no more peat to each bed. Instead, as these layers settle and become food for worms, more layers will be added, of grass clippings, leaves, manure, and homemade compost. That should do it - in theory, at least.


We filled four of the eight beds. Hopefully, this weekend we will do four more. Then, at some point, I will need to mix up batches for the potato grow bags, sooner for the Irish potatoes and later for the sweet potatoes.

Speaking of sweet potatoes, my attempt to grow slips is a big FAIL so far. I am trying again, with a less wizened-looking potato this time. Also, I moved them out from under the grow lights. Does light hinder root development? Must research.
Posted by bittenbyknittin at 2:03 PM No comments:

This afternoon I worked in the yard a bit, spreading wood ashes in the new raised beds and topping them off with leaves from last fall, and I had to abandon the scarf, jacket, and cap I started with. Tomorrow is supposed to be still sunny and warmer yet, but then the rains will return.

No daffodils blooming, but the garlic is making its appearance after its long winter's nap. As you may recall, this is experiment number one with square foot gardening. 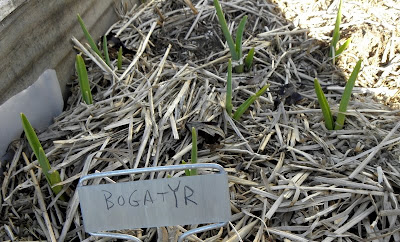 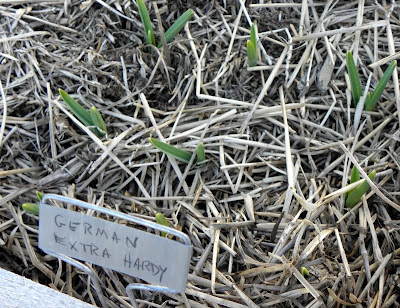 The Onondaga viburnum was not looking too healthy last summer, and over the winter it gave up the ghost.


I'm not too sad because, although the blossoms were beautifully complex, this shrub was bred not to fruit, something the nurseryman forgot to tell me even though I told him I was creating a backyard habitat. Of the three viburnums he sold me, one variety does not fruit at all and one does but only with the appropriate Dentatum cousin to cross-pollinate with. Only the Blackhaw is reliably fruitful all on its lonesome. Lesson learned - it pays to do one's homework.
Posted by bittenbyknittin at 5:28 PM 1 comment:

The wind continues, but fortunately no tornadoes in this part of the state. Even though I did not even lose power, my Internet went out (horrors!) Frontier tech support talked me through resetting the battery-backed up wall unit, which comically disconnected us. But the solution worked (obviously).

Backyard drama frequently includes this Cooper's hawk. I assume there is either a sparrow or a rabbit in that brush pile.


Grackles arrived on February 26, a robin on the 28th, and a blue bird in that time frame as well.


When I see finch feeders in catalogs with 20 perches and a bird on each perch, I assume the photos have been digitally altered, but maybe I shouldn't.


On the plant front, I repotted the Meyer lemon, the onions continue to grow under lights, and the rosemary cuttings are rooting, but the sweet potatoes are just sitting there. If something doesn't happen soon, I will need to order some slips.
Posted by bittenbyknittin at 5:32 PM No comments: