It is too early to start transplants from seed, even broccoli, but that does not mean I can't get prepared. 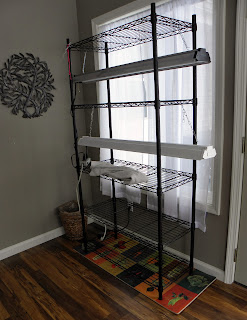 Last year I tried growing transplants in the garage, thinking the cooler temperatures out there would keep the plants from getting leggy. Instead, they pouted. So I moved the rack back inside. If I weren't planning some major renovations to the house, I would locate the rack elsewhere, but the West Wing will have to do for now. It is cool out there most of the time, unless there is afternoon sun.

Then I hacked up the coleus mother plant, to clone transplants for the flower box on the front porch. I did something similar last year, and it worked out well and saves me a few bucks at the greenhouse. 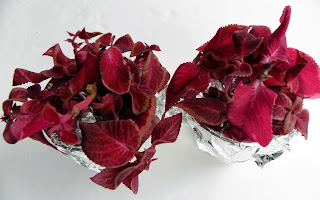 The snow has begun to melt. Last night we had weather alerts for wind, fog, flooding, AND thunderstorms. Fortunately, the rain was short lived. This morning the temperature is still above freezing, but that won't last. Can't put away the wool sweaters just yet.

Posted by bittenbyknittin at 6:39 AM 3 comments:

Are you tired of my posting about the weather? Yeah, me, too. So let's talk gardening.

Today I ordered blueberry plants, LOTS of blueberry plants. Some for me, a couple for my daughter, even two for my son. And all different varieties, so somehow, someway, we are going to have blueberries. Some day.

A couple of years ago I spontaneously purchased a 'Patriot' blueberry plant. It never amounted to much as I first stuck it in a pot, then the garden, then I moved it a couple of times. But now that the south side of the house is destined to become a berry patch, I bought it a companion. Or five.
I chose these three varieties because one bears in June, one in July, and one in August, so I expect to have blueberries all summer long. Another criterion was their fall foliage, since they will be visible from the street.

For my daughter, I selected: She said she wanted something early rather than late. One of these bears in June, the other in July, *and* they pollinate each other.

For my son, who lacks space for a garden, I chose a "patio assortment", two varieties that are small enough for growing in containers.
Disappointed with my so-called "everbearing" strawberries, I also ordered 'Earliglo' June-bearing strawberry plants. Once they get established, the (n)everbearing will become compost.

I had plans to also start a mini orchard this year, but decided to wait until next. I want to better prepare the soil, plus better understand their care. Otherwise, I might as well plant $20 bills in the yard.

Posted by bittenbyknittin at 6:37 PM 4 comments:

Second verse, same as the first

Oh, great, now THAT song is my newest ear worm.


Last Saturday I nearly cried while watching slush fall from the sky. I thought maybe winter was getting to me, but it was just the slush talking. I am okay with snow, even this much.


Once again, my wonderful neighbor came to my rescue and blew the driveway. THANK GOD, because clearing the front walk almost did me in. There is nowhere to put the snow anymore. I tried throwing it over the existing mounds, failed in the execution, and watched the pitched snow tumble back to the sidewalk.


I still had to clear the patio myself so that the dog could get beyond the step to do her bidness. That wasn't so bad, primarily due to the fact that snow does not stick to the backyard shovel like it does the front yard shovel.


What? You don't have two shovels? I use a "back-saver" in the front because of the driveway, a regular shovel in the back. The latter is the one I used to carry in the car, along with clay kitty litter, but now I just stay home when the roads are crappy. The wonders of technology allow that, so nyah.


It is supposed to stay cold so maybe, just maybe, I will break out the cross country skis this weekend. (I probably just jinxed myself.)
Posted by bittenbyknittin at 7:01 PM No comments:

I am so tired of seeing nothing but white when I look out the window. And today, just to add a special twist, Mother Nature is topping it off with some freezing rain. Glad I don't have anywhere to go.

While it looks like everything is frozen and still, secret activities occur below the surface of what we see. I would not have noticed or identified this hole in the snow as belonging to a mouse if I had not seen the critter venture out for a second before scurrying back to safety. 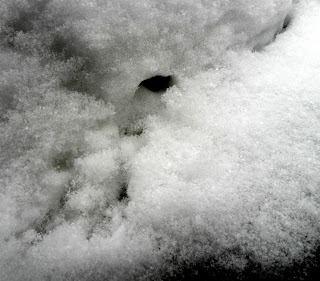 Come spring, evidence of rodent tunnels will snake across the dormant lawn until the grass greens up and grows.

Posted by bittenbyknittin at 7:40 AM No comments: