This past week, I have been laboring away in the so-called orchard. This includes what I optimistically designated as the Blueberry Bed. The blueberry plants have not fared well, falling victim to wascally wabbits. Also, thanks to volunteer milkweed plants, the b-berry plants barely see the light of day.


Last summer, the milkweed in my yard fell victim to aphids, farmed by ants. I have tried several natural ant repellents - coffee grounds (thanks, Starbucks!), Russian sage, catmint - but the ants are back. So far no aphids, though. Fingers crossed.


Along with the milkweed is a cousin, Indian hemp (Apocynum cannabinum). It was only on last year's Garden Bloggers Fling that I was able to identify this plant. A native, it is supposedly very attractive to butterflies, so its presence among the milkweed seems natural.


The scent of milkweed blooms is incredibly sweet, a gardener's reward for battling bindweed and other unwanted plants in the bed. I'm hoping by developing an entire stand of milkweed, I will someday also be rewarded with monarch caterpillars (and not the "other milkweed caterpillar" that last year destroyed my butterflyweed). One can only hope.
Posted by bittenbyknittin at 12:38 PM 1 comment:

I've seen others post as part of the Garden Bloggers Bloom Day and decided to give it a try. I would not describe my yard as being colorful right now, but there actually are a lot of plants in flower or just starting their bloom period.

First up are the Early Wave 'Velour Red' petunias among the sweet potato vines, high in the sky on the pergola. Last year's candidates for these planters were a FAIL. I think the petunias will not be returning, as I have to climb a ladder in order to dead head them. 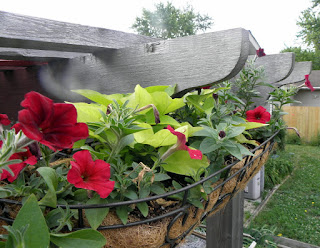 The 'Betty Corning' clematis are hitting their stride. Next year, the trellis supports will be replaced with 72" tall, 24" wide tuteurs (recently purchased, on sale at Gardeners Supply). Also, I may limit the number of vines growing up from the base - these plants get HUGE. 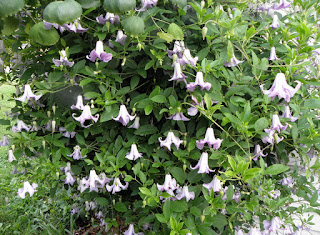 Most gardeners may consider fleabane to be a weed, but I have come to appreciate it in limited quantities. It is a native, blooms all summer long, and comes back on its own. 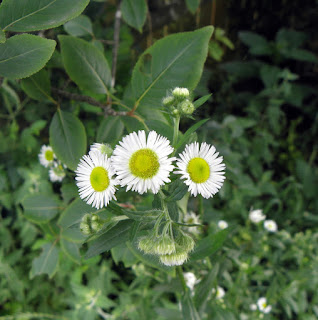 I truly love the coral color of the 'Major Wheeler' honeysuckle vine. Unfortunately, it is rather hidden from general view. Currently, the vine is climbing right over the privacy fence. I'd like to train it to stay on this side. 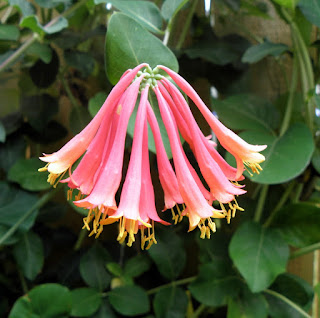 Catmint is a reliable summer bloomer. This is 'Walkers Low'. Bees love it. 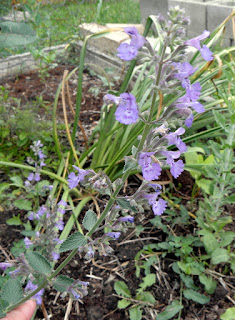 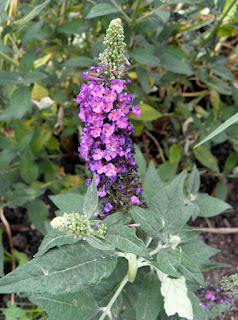 For some reason, the raspberry patch is full of four-foot-tall red clover. Despite my cleaning up this patch every year, all kinds of stuff competes with the brambles, to the point I am abandoning it after this year's harvest. 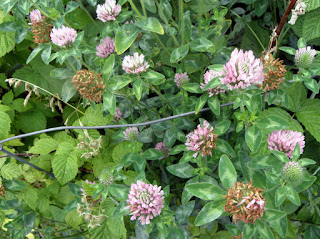 This it the second year for the lanceleaf coreopsis. It survived attacks by rabbits and woodchucks and is now blooming semi-profusely. Love seeing that cheery yellow. 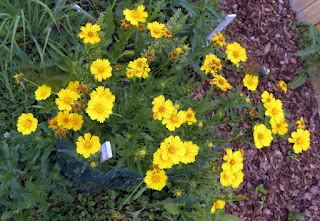 The tiger lilies are just starting; this might be 'Orange Star'. At one point, I moved them all to one bed, more as a survival strategy than a design technique. Now I would like to scatter them around the yard. 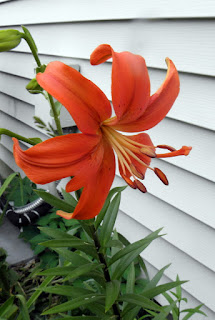 I've had this 'Avant-Garde' clematis for a long time. In previous years, I let it flop over the garden gate, but that garden gate is gone now. It too will get a tuteur next year, a little smaller than Betty's. 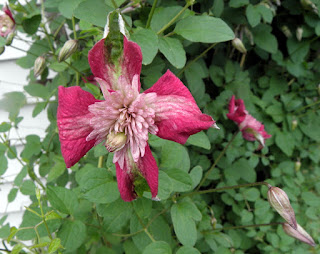 After the tulip fiasco, I planted sweet alyssum in containers and added a pink geranium for a burst of color. The geranium is not working out as I had hoped, so I may add some zinnias. 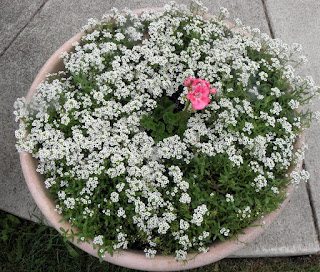 The pink geraniums and petunias on the front porch are doing fine, though. I used to concentrate on yellows in the front yard, to contrast with all the purple-leaved plants, shrubs, and trees, but this year I discovered pink works well, too. 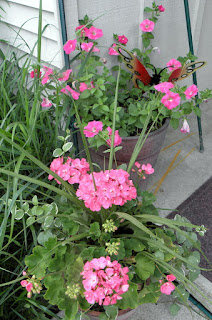 The 'Zagreb' coreopsis is just starting. Not only is this the most resilient coreopsis I have ever grown, the clumps are now spreading. 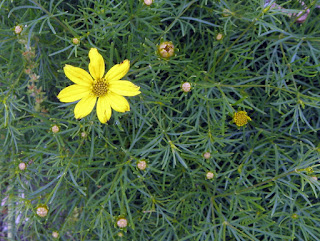 The 'Route 66' coreopsis seems to have disappeared, but there is still one clump of 'Tequila Sunrise'. 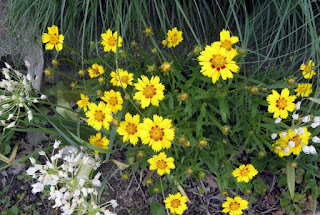 This is a migrant yucca, able to leap broad sidewalks in a single bound. It gets more sun than its parent clump. It is also destined to be removed - naughty plant has boundary issues. 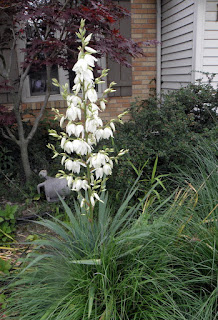 This might be 'Francis Williams', the first hosta to bloom this year. Last summer I tried to identify all the hostas in my yard, but many remain a mystery. 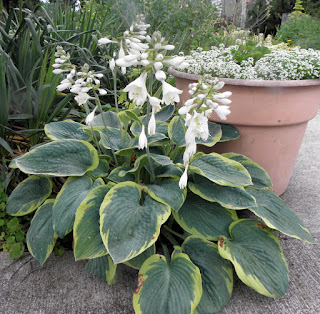 Once upon a time, I had 12 (TWELVE) Stella d'Oro daylilies in my front yard. I gave away most of them, but a few clumps remain. Now I am feeling more kindly toward them, plan to divide and spread them around again, as they are a great source of yellow. 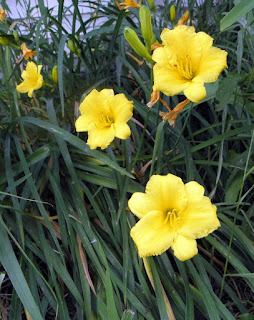 Gout weed is not a flashy bloomer; I'm just glad five of the six plants I planted under the 'Limelight' hydrangea survived. The goal is for these survivors to spread all around the hydrangea but go no farther. Lots a luck, right? 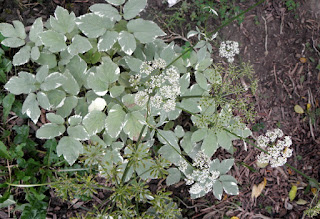 Today I purchased a few more plants in bloom, some marigolds in pots to go under the purple smoke bush, as the little zinnias there are not thriving, and a shasta daisy to replace the one that did not survive being transplanted last year.

And that's about it for now. How is your garden blooming?
Posted by bittenbyknittin at 4:36 PM 4 comments:

I planted some cherry trees (two sweet, two sour) and apple trees a few years ago and pretty much neglect them. The other day I was taking a closer look at them while contemplating some heavy pruning when I noticed... FRUIT! 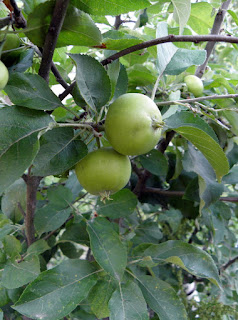 I think the apples are Pristine, a descendant of the Macintosh and Starking Delicious. The flavor is described as "sharp/refreshing" which I think means "tart/crisp", but the reason I chose this variety is its natural disease resistance (see neglect above). The apples look round which means they were well pollinated... I think. My intimate knowledge of apples is not very developed.

These cherries are definitely tart, which is why the birds haven't been feasting on them too much. I think this tree is the North Star Tart, a great pie cherry. Yummmmm! 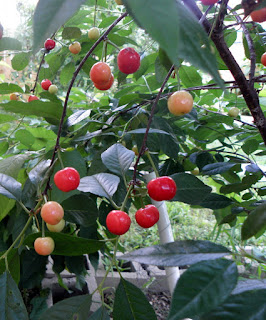 Elsewhere in the yard I spotted a crabapple on my brand new Perfect Purple. There are also berries on the serviceberry but I couldn't get a decent photo - the camera kept focusing on the leaves and not the fruit. 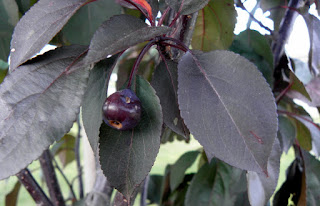 The climbing rose has never been so dense with blossoms as it is this year, obscuring the fruitfulness of robins. 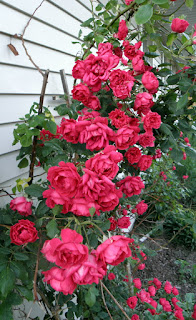 Until I edited this pic, I didn't realize there was an egg in the nest. See the bit of blue? 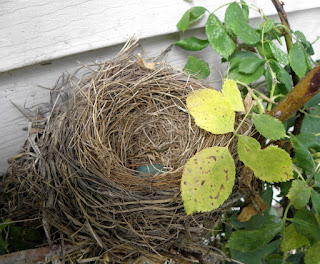 How fruitful is your garden?
Posted by bittenbyknittin at 5:26 PM No comments:

New kids in the yard

They say the best time to plant a tree is twenty years ago. I don't let that stop me, especially since removing all the silver maples left my property rather lacking in shade. The newest tree is the Perfect Purple flowering crabapple.


The leaves of this beauty remain purple throughout spring and summer, which I why I picked it, then turn red in the fall. The spring flowers are rose, the fruit a deep purple. It should grow to be 20' x 20'.


I'm past the point of digging holes for trees, so I had Arbor Farms plant it, but my SO and I were able to handle two new shrubs.


After visiting some friends who own a wholesale nursery, I came home with a Golden Spirit smokebush/smoketree. (Tomato, tomahto.) I spotted this plant while on the Garden Bloggers Fling last summer and decided I had to have one, to go with the purple one I already have.


I have six purple plants in my front yard - in the photo above you can see (from left to right) the Crimson King maple, a Japanese maple, and a sandcherry - and want some significant yellows/golds for contrast. Right now the smokebush looks like a light is shining on it from above. I'm anxious to see how it looks when it "smokes".


Smokebushes can get rather large - up to 15' tall and 15' wide'. I planted its purple cousin too close to the house and now that the King Crimson is big enough to cast some shade, it gets leggy from not quite enough light. I gave this yellow one plenty of room and a sunny spot so it will continue to shine.


Arbor Farms sent me a coupon for $45, which happened to be what a Lemony Lace elderberry cost. I was going to plant it next to the front porch, at it tolerates shade, but I was afraid too much shade would cause its lemon color to turn to green. Instead, the plant is nestled between the mugo pine and cotoneaster, in front of the picture window.


I've avoided elderberry in the past because it usually requires wet feet and can spread. This one needs regular watering but is adapted to well drained soils. If it tries to spread, it will be blocked by a ring of edging that came with the house and until recently circled a boxwood.


This specimen is supposed to grow to be about 5'x5', so I may have to do some judicious pruning to prevent it from blocking the view. But it also can get a bit leggy, and if that means an open habit, it may provide some privacy without too much obstruction. Although developed primarily for its foliage, it does produce white blossoms in the spring which develop into red berries.


My front yard feels a bit full now, although I would also like to add a Sunkist arborvitae and a few Fire Chief globe arborvitae, maybe planted in a grouping. I'll let these newbies settle in first.
Posted by bittenbyknittin at 4:45 PM 1 comment: