Bring on a downpour!

Last week's big excitement in front of my house was the upgrading of the storm sewers. While sheltering in place (more or less), I kept tabs on the progress. It looks like they are basically done here (except for seeding lawns and repairing my neighbor's driveway), but today's dog walk revealed that they continue the job one street over. 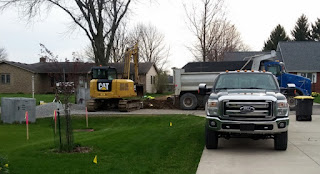 While all this was going on, I probably could have squeezed my car down the driveway, but since there was nowhere I had to be, I hunkered down except for dog walks. The daily newspaper arrived each day, but the mail carrier could not reach the boxes once. I don't get much mail these days anyway, but I was on the lookout for another disc from Netflix. 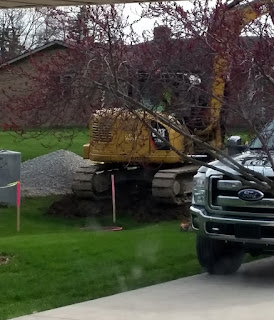 The sewer grate on my side of the street is not actually on my property, so lawn damage was peripheral for me. I was a little worried about my nearby flowering crab - what if the backhoe backed over it? - but they did not even get close. 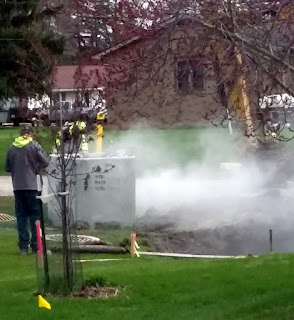 They had to cut the road which has been a bonus: drivers slow down when they see it, although it is not much of an obstacle. The front loader doubled as a street sweeper, so the roads have been relatively clean throughout this process. 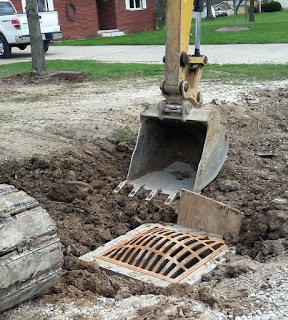 I kid my neighbor across the street that I did not have a problem with flooding until he redirected his sump pump to the front of his property. Apparently, the engineers took this into consideration, as the construction crew provided his sump outlet with a conduit to the sewer. 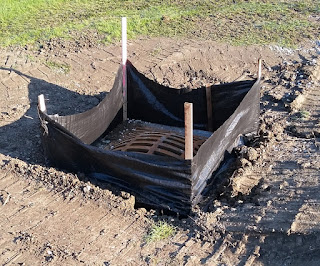 So now I am eager for a big rain, to test this new design. Instead, yesterday we received SNOW. I swear we almost always receive a snowfall in April, but I am hoping this is the last of it. I don't think it is going to interfere with the flowering shrubs and trees. I mowed last weekend, but I think I'll skip it this time.
Posted by bittenbyknittin at 4:07 PM No comments:

Piddling in the yard

Yard cleanup continues. I have been cutting up the longer stalks so I can fit more into the trash can, but now am thinking if I am going to that much trouble, maybe I should just let the pieces mulch, then compost in place. Once I have finished downsizing the garden, I may just do that.

While cleaning up, I came across this thing. I suspect it is a spice bush I planted in 2017 (I think - there doesn't seem to be a blog entry about it). I thought I had moved it to the south side of the shed, but whatever I did transplant did not survive. If this is a spice bush, I am very glad to see it. 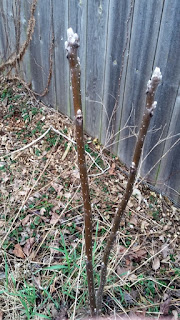 There are more crocus (crocii?) than usual this spring. Even though we had a mild winter, maybe it wasn't beneficial to the local rabbit population. The daffodils are blooming as are the pink hyacinth. And then there are fungi. 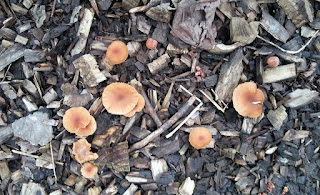 I reassembled and repositioned the tuteurs for 'Betty Corning'. Last year's experiment of trying to direct these clematis vines to the nearby redbuds was a fail because the Betty's don't get tall enough. Maybe this year I will prune back some of the vines, to try to control the rampant growth. In case I forget, I anchored the tuteurs to the downspouts.

The neighbor who lived behind me kept two compost bins behind his shed. When he moved, he took one with and bequeathed the other - and the compost in it - to me. The compost has been sitting in old recycle bins in the garage... until yesterday, when I spread half of it on the front lawn. My spreader is old and decrepit, and it seemed to get hung up on the pieces of egg shell, but I managed to make one pass over the lawn. The walk across the lumpy lawn and the pushing of the spreader reminded me of why I purchased a riding mower a couple of years ago. My ankles and arms were sore after that.

I hope you all are playing it safe, staying home, washing hands, etc. Keep calm and garden on.
Posted by bittenbyknittin at 7:33 PM 1 comment: