Once upon a time, I kept the cat's litter box in the laundry room, in front of the dryer. This blocked a door I never used and also caused some swearing when I occasionally dropped a sock into the litter, but in general it worked okay.

Somewhere along the way, the cat box moved to the Florida room. This was better because the door I never used was no longer blocked, I stopped dropping laundry into the litter, and the mess was confined to a room that was a glorified mud room.

Now the Florida room is gone. During construction, I moved the cat box to the main bathroom. This is okay except when I have visitors or when the dog is looking for a snack. I contemplated moving the box into the bottom of the linen closet but this would mean either leaving the door to the linen closet open all the time or cutting a cat door in the linen closet door, something I was not all that enthusiastic about.

Then I saw this in the Plow and Hearth catalog: 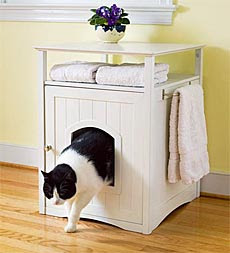 Believe it or not, this "cat washroom" would fit in the laundry room, in the corner between the kitchen door and the new room doorway. The only bad thing about this location is stray litter may get tracked into the kitchen and/or new room. But it is a possibility.

Plow and Hearth also has some Dirt Trapper rugs I am interested in. And then there are the insulated curtains. I have them in my livingroom and bedrooms, and will now probably add them to the patio door and the new room.

An aside on cat litter: A while ago I switched from a clay-based clumping litter to Swheat Scoop. It doesn't clump quite as well, but my cat has stopped urping. I am probably jinxing myself by writing this, but seriously, she went from being The Urpomatic to being a non-urping feline. She gets an almost-daily dose of Petromalt, too, which probably helps, but still. No urping. Really. My SO tried Swheat Scoop in his cat's self-cleaning litter box, but it didn't work well, so bear that in mind.

An aside on the room: I was wrong about the building inspections being done, because there was one more final inspection. I'm not even sure what it was for, but whatever it was, it is done. I think the only things that remain are some electrical things (the outlets are supposed to be tied to a switch on the wall and the light kit for the ceiling fan needs to be installed) and a floor thing (there is one plank that looks flawed). I still don't like the feel of the wood laminate when I walk on it barefoot, but if I am wearing shoes, it is tolerable.
Posted by bittenbyknittin at 9:05 PM No comments:

It's Not Final Until It Is Final 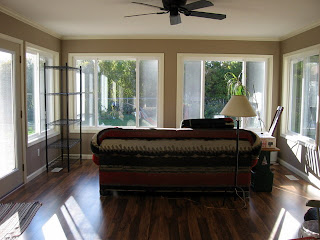 Red is my favorite color... 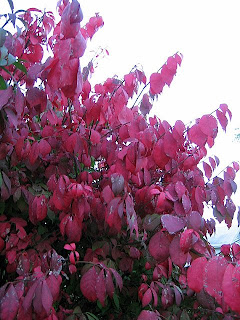 ... but it is not the only color of autumn. There is the bronze of the oat grass... 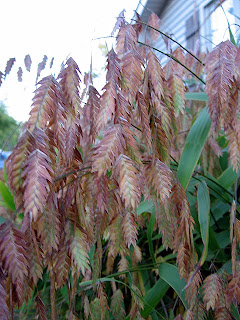 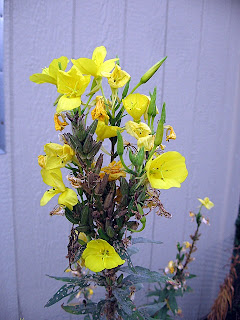 ... and the purple of the Vibernum prunifolium... 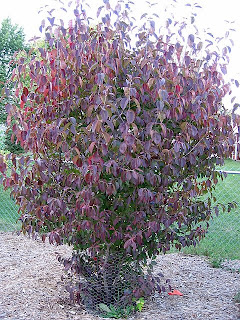 ... aka Blackhaw Viberunum.
Posted by bittenbyknittin at 7:26 PM No comments:

The room is done, but I wanted to whine one more time about the floor, so the contractor came by last Thursday and he brought reinforcements: his interior person and the flooring lady. I had already talked to the people who installed flooring in the rest of the house and they did not think there was anything unusual in what I described - it is a floating floor after all - so I guess I will just have to get used to it.

There are still some little things that need attention, like the weather stripping in the patio door and a missing hinge pin and this and that. And yesterday I noticed that one of the floor boards looks partially unfinished. *sigh* I am going to ask my son-in-law to do a final inspection since he is a fixer-upper and his eyes are younger than mine. Then I will have to just let it go.

All in all, the whole project went relatively smoothly, BUT. My house is nothing special, just a run-of-the-mill small ranch, but it is built very well, everything solid and true. I'm not convinced that the overall quality of the new room is up to the standard set by the original builder. When I was house hunting and contemplating building or buying a new-new house, I was struck by the low quality of new construction. I just hope that my new room does not age faster than the rest of the house.

This past weekend, I started to reclaim my house. Most of the inside stuff is put back together and the garage is clear enough that I can park the car inside again. Unfortunately, a review of my finances indicate I will have to stick with the old, ugly, does-not-match-the-decor furniture for now.
Posted by bittenbyknittin at 9:40 PM No comments:

If I had pumpkins, there would have been a little frost on them this morning. Not a hard frost - no tomato plants were harmed - but definitely a bit of rime here and there.

Today I invested in some floor tools, a dust mop (at least, that is what we used to call them) for the wood laminate floor that I am beginning to hate (it feels like I am walking on paneling) and a broom because two out of the three brooms I own have disappeared, having either hitched a ride on a visiting panel truck or become buried under all the crap in the garage.

(Which brings up an interesting aspect of my experience with contractors: if your ladder is handy (or your bucket or your broom or your tape measure), they will use your tools rather than exert the effort it would take to fetch their own from their truck. And fans. Fans are needed for drying things like drywall mud, so you had better have some.)

I also looked at some furniture in World Market. I like the sectional sofa and matching arm chair on display. I liked them even more after I put a couple of pieces of my old furniture into the new room and found them quite retching.

In case you can't tell, I am a little crabby tonight. The muscles in my left hip are in a knot and that knot won't let go in spite of my usual ministrations. It didn't keep me from mowing today, because walking is not painful. Neither is sitting. It is the transition from sitting to standing that kills. It is hell getting old.
Posted by bittenbyknittin at 9:12 PM No comments:

There Is Always Something

Wednesday the floor was finished, today the trim was added, BUT. Now the painter has to return again, to fill in nail holes and stain the trim around the attic access. 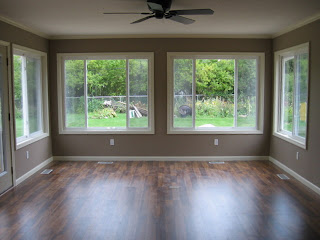 My questions are 1) when is he coming? and 2) can I go ahead and start moving furniture?

The floor feels more stable, but I'm not completely sold on wood laminate yet. The problem is as soon as someone says the magic words "low maintenance" I say "YES!" 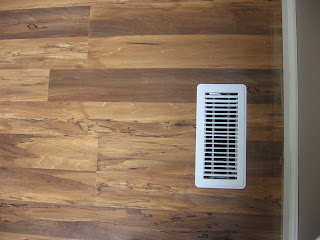 The temperature has dropped to pleasant autumnal levels, and we even received a little overnight rain. I have a few pink daffodil bulbs to plant, but otherwise most yardwork falls into the category of Fall Cleanup.
Posted by bittenbyknittin at 3:32 PM No comments: